Active-Active Storage Replication: Why don’t more organizations get it, or “get it”? 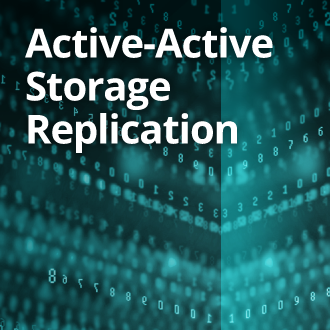 In 2003 RoperASW conducted a survey of business executives and IT executives relative to their perceptions about their organization’s ability to provide Business Continuity in the event of an IT disaster. That survey exposed a chasm of difference of opinion between the business execs and the IT execs in the U.S. relative to how well protected they thought they were, while in contrast the executives of both functions in Europe were pretty much on the same page.

The first question asked was: “If a man-made disaster or natural disaster affected your company's main data center, how vulnerable would your company be to losing access to business-critical data, such as that generated by your core transaction systems?"

The second question was: “In the event that your company lost access to business-critical data, such as that generated by your core transaction systems, how long do you think it would take for your company to resume normal business activities?”

Multi-site replication solutions that are technically capable of providing zero RPO (no data loss at all) at zero RTO (no pause in business operations) without human intervention first entered the market in 2010 with EMC’s VPLEX, using external virtualization appliances. Dell EMC has since enhanced SRDF for their VMAX/PowerMax systems natively with SRDF/Metro. Infinidat provides a zero RPO at zero RTO solution with Active-Active replication which is native, standard, and included with all InfiniBox systems at no additional charge (like all Infinidat software), and Pure Storage provides a similar solution for their FlashArray with ActiveCluster.

So it’s the year 2020 and there are proven “zero RPO at zero RTO” solutions available in the market from multiple vendors. Every mission-critical data center naturally has deployed one of these technologies to protect itself, right?

WRONG, and I have a hypothesis for why: There is still a disconnect between the perception of U.S. business execs and their IT counterparts when it comes to data protection, just as there was in 2003, even though the technologies that improve RPO & RTO have evolved.

This disconnect explains why many Active-Active multi-site projects suggested by IT to protect their organization’s business don’t get funded - it’s because the business execs (incorrectly) already think that they’re sufficiently protected!

Just as in 2003 however, there isn’t a big disconnect between the business and IT functions in Europe, and as a result Europe has mostly led the way since 2010 in the number of multi-site data protection deployments, especially those that are Active-Active, regardless of vendor. Europe “gets it”.

There’s an old saying that “most people do their first PC backup AFTER their first C: drive failure”. Please don’t wait for your first data center disaster that results in data loss and extended recovery time to realize that it all could have been easily prevented.

So what can you do to help yourself?

Or please come and talk with us at Infinidat! We and our partners can help you easily attain confidence in a “zero RPO at zero RTO” multi-site business continuity solution. And we can even uniquely integrate a third (or fourth) site with the industry’s best RPO & RTO for asynchronous replication for remote disaster recovery too.