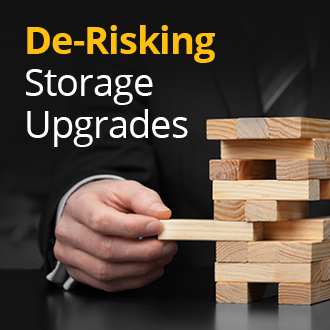 During the life cycle of an enterprise storage platform, administrators will likely upgrade that platform a number of times.  In defining upgrades, we're specifically discussing within-system upgrades which include issues like firmware and software upgrades, applying software patches, and various types of hardware upgrades where relevant (e.g. controllers, storage devices, etc.).  For storage platforms that host at least some mission-critical workloads, the ability to perform within-system upgrades non-disruptively is a critical requirement.

Because it puts IT infrastructure much more in the path to critical business success, the digital transformation that most enterprises are undergoing only enhances the need for higher availability across a variety of different workloads.  Design decisions as well as feature implementations can significantly minimize upgrade risk (and in some cases remove it entirely), and there are a number of things to look for in a storage system that absolutely must support non-disruptive upgrades.

IDC has noted a trend towards increasingly dense mixed enterprise workload consolidation as customers refresh their storage infrastructure.  While workload consolidation can drive compelling economic and administrative benefits, it also potentially increases the size of the fault domain.  This makes high availability a foundational requirement for a workload consolidation system.  The overall availability of a system is impacted not only by the level of redundancy and the failure recovery routines built into a system but also by how it behaves during routine within-system upgrades.  With many enterprise storage vendors claiming to deliver "five or more nines" reliability during normal operation, customers also need to look at and understand how upgrades are performed and how those upgrades may impact application services.

That said, what should enterprises be looking for in a storage platform that needs to support truly non-disruptive upgrades?  Here are some of the key ones with quick discussions of why they're important:

Use of these three design considerations is widespread among enterprise storage array vendors that have architected their systems within the last six or seven years.  But Infinidat, an enterprise storage provider who focuses on selling large scale systems that are specifically architected for dense mixed enterprise workload consolidation, has gone beyond these three common approaches with additional innovations that further improve their ability to provide non-disruptive operations.  That is the focus of my next blog on the topic of de-risking upgrades.

Eric Burgener is Research Vice President within IDC's Enterprise Infrastructure Practice. Mr. Burgener's core research coverage includes Storage Systems, Software and Solutions, quarterly trackers, end-user research as well as advisory services and consulting programs. Based on his background coverage enterprise storage, Mr. Burgener's research includes a particular emphasis on flash-optimized arrays, emerging persistent memory technologies, and software-defined storage. He was awarded the Alexander Motsenigos Memorial Award for Outstanding Innovation in Market Research in 2017 by IDC, was chosen as one of the Top 100 analysts ranked on ARInsights' ARchitect Analyst Power 100 and is an active participant in the IT Buyers Research Program at IDC.