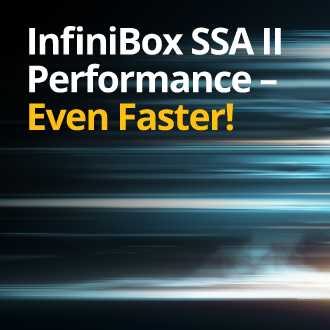 The InfiniBox SSA was developed directly in response to customer feedback from some of the largest enterprise end-user and service-provider IT organizations in the world. They asked if we could fill a performance void that they told us no one else had yet been able to address to their satisfaction - the ability to provide consistent ultra-low latency, super-fast response times, for virtually every I/O that they process - not just great latency for an overall average of their I/Os. They further told us that such an enterprise storage solution, if possible, would provide them with valuable competitive differentiation for their real-world applications and workloads.

They were also quite clear what kind of performance improvements they wanted. While bandwidth and I/Os per second (IOPS) performance needs must always be met, they knew that most of the better enterprise storage systems from most major vendors, including Infinidat, today are all very capable of meeting or exceeding their requirements for bandwidth and IOPS, almost all of the time. We agree. The storage performance battleground now, and for the future, is latency, and that’s what they told us they wanted: consistent ultra-low latency.

Last year when Infinidat announced the InfiniBox SSA, we boldly shared that in all real-world, real customer application performance tests, that InfiniBox SSA had bested all major alternative enterprise storage systems, to date, for lowest latency. We’re talking about InfiniBox SSA consistently proving in all real workloads that it is faster than the high-end enterprise storage systems from virtually all of our major competitors. This includes being consistently faster than some that claim that they are “the world’s fastest data storage array”. These kinds of “hero number” claims from our competitors always seem to be based upon a vendor's own proprietary internal “lab-experiment” artificial benchmarks, which they concocted themselves to try to make their systems appear to be fast. These kinds of benchmarks typically don’t even remotely resemble what any of your real applications might look like, and are intended specifically just to generate “hero numbers” for marketing bragging rights.

It is 10 months since the public announcement of the original InfiniBox SSA (mid-June 2021), and while at some point it is certainly possible that a competitor may produce a new system that is capable of outperforming InfiniBox SSA in a real-world workload, it hasn’t happened yet. Quite to the contrary, InfiniBox SSA has continued to defeat all comers in all real-application performance “bake-offs”. 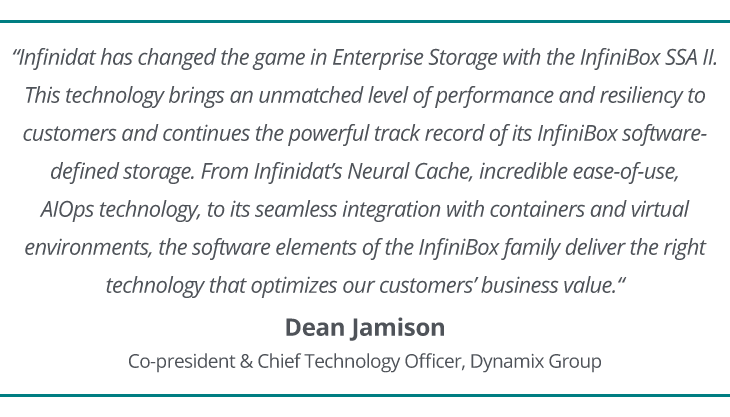 But this industry moves much too fast for Infinidat to get complacent, and we’re grateful that our customers continue to guide us toward continual improvements. With today’s announcement of the InfiniBox SSA II, we’re introducing a new system that is even faster (and supports more capacity): The InfiniBox SSA II.

How is the InfiniBox SSA II faster?

How fast is InfiniBox SSA II? We’re announcing that we are seeing real-world workloads at existing customer sites hit performance floors as fast as only 35 microseconds for storage performance. Not artificial hero numbers that no real application has ever seen, but observed performance from real, live, customer applications. In addition to great low latency, customers are seeing dramatic bandwidth and IOPS performance. 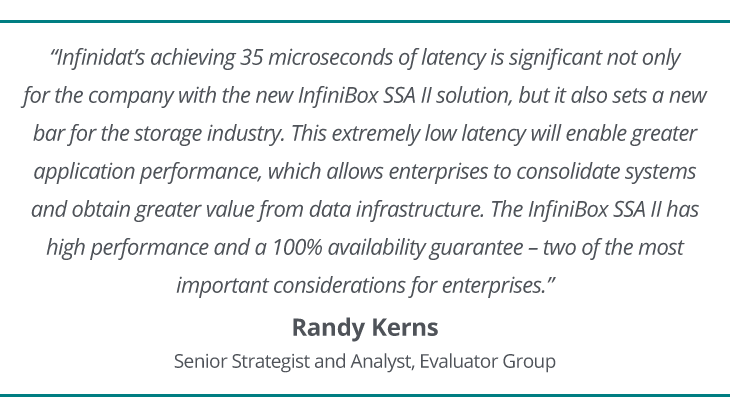 One of our beta site customers put the InfiniBox SSA II to the test, by porting over an existing performance-critical Tier 0 Oracle application environment from their existing high-end enterprise legacy all-flash arrays - specifically from the one that publicly claims to be “the world’s fastest data storage array” and has been tuned and optimized over time for their current production environment. InfiniBox SSA II, without any tuning (none required!) delivered 56% more IOPS, and 59% more bandwidth. At the same time, the InfiniBox SSA II delivered the much lower latency, as the customer expected, and almost certainly at a much lower cost, with Infinidat’s 100% availability guarantee.

Here’s a screenshot of real-world, real-application performance from a live first-generation InfiniBox SSA that has been running in production for one year at that same customer. This data shows how the system has been performing for the last 40 minutes, as I’ve been typing this, and it is consistent with how this system has been performing for the last year. It seems to have settled in at some amazing performance, which has hit read latency floors of 30 microseconds, and is consistently delivering write latency performance at around 80 microseconds. Also notice that the total read latency, which includes the end-to-end performance up to the server and through the network, is at an incredibly fast 90 microseconds “all in”. This application has been seeing this kind of performance not just in the last 40 minutes, but almost every day for the last year. So, when we now state our “hero number” of 35 microseconds latency performance, we’re maybe being a bit conservative, despite it being based upon real customer experience. 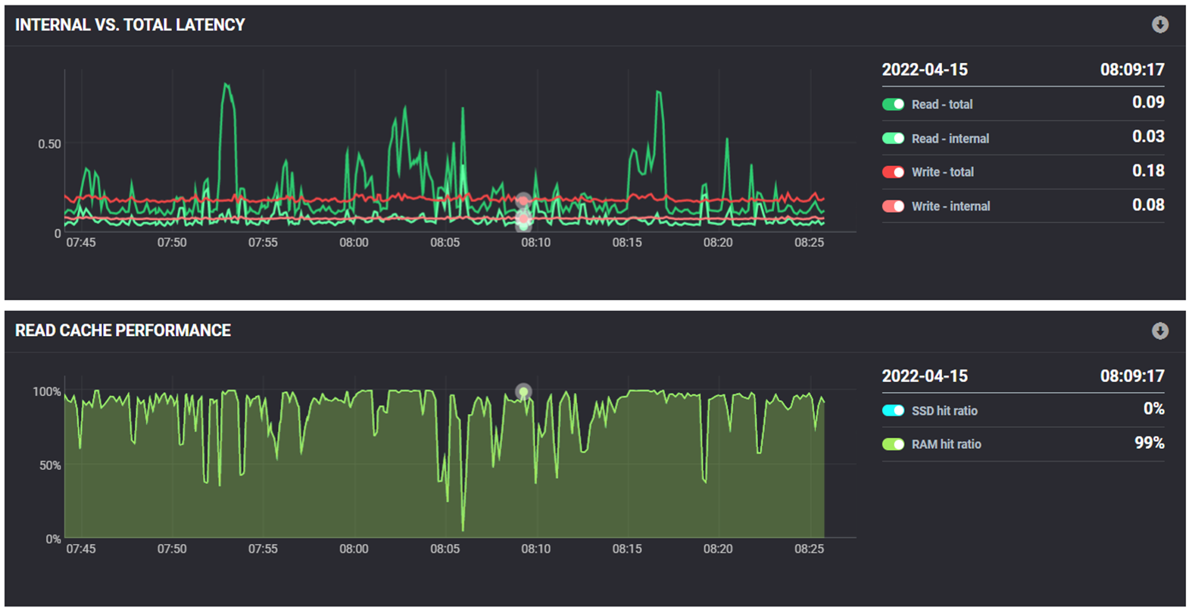 As always, your actual performance experience will be unique to your applications and your environment. At Infinidat we welcome the opportunity to explore how the InfiniBox SSA II can perform for YOUR applications. With a full performance evaluation, we may also be willing to GUARANTEE the expected new performance for your applications. If your organization can benefit from better performance, let’s talk! So far, our existing enterprise customers have told us that they have never seen anything faster, and they love what that does for their business.