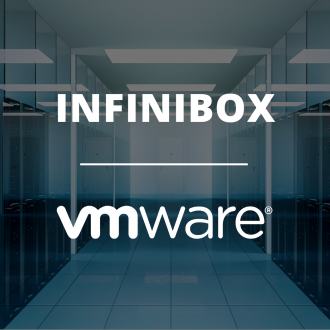 Infinidat is pleased to announce the extension of our support for NVMe/TCP to VMware environments with the release of InfiniBox 7.1. As part of the NVMe over fabrics family, our extension of NVMe/TCP for VMware provides customers with an easy and cost-effective way to get the most out of their existing investments in network infrastructure and our industry acclaimed enterprise storage platforms.

VMware customers using vSphere 7.0 update 3 can now benefit from NVMe/TCP, and will continue to enjoy improvements to the protocol support with the upcoming vSphere 8 release. Together with the release of InfiniBox 7.1 and the accompanying Host PowerTools for VMware (HPT-VM), VMware customers using InfiniBox get the same simple, intuitive and self-configuring experience for NVMe/TCP that they are familiar with when using iSCSI and FIbre Channel (FC).

Together with the newly added NVMe/TCP support for VMware, InfiniBox 7.1 offers support for all major Linux distributions, as NVMe/TCP is gaining momentum in that space as well. The same benefits exist with Linux and NVMe/TCP, from the cost of infrastructure to the performance gains, and we want all of our enterprise customers to benefit from all our solution developments.

InfiniBox support for NVMe/TCP on VMware comes at no additional cost via a simple and non-disruptive software upgrade, and is available for all supported InfiniBox models, regardless of HW generation or capacity.

NVMe/TCP is sometimes referred to as an evolution, mostly of iSCSI, and sometimes as a revolution. Both are true.

You can say it’s an evolution because, at its essence, iSCSI and NVMe/TCP serve the same purpose: high speed and low latency access to remote centralized storage using block semantics. Both can use flexible provisioning based on application needs, while similarly enjoying data services on the storage array, such as snapshots, clones, and data reduction.

The revolution part comes from the fact the protocols had a fresh start. The clean slate starts with NVMe, the protocol used for direct attached storage, which aims to replace SCSI-based protocols, such as SAS. NVMe, compared to iSCSI, has more parallelism built into it to take advantage of the advancements in solid state drives. Those advancements were carried over to NVMe over Fabrics (NVMe-oF), and its specific derivatives such as NVMe/TCP which runs on standard Ethernet networks.

NVMe/TCP is particularly interesting when compared to its siblings running over other transports (FC and RoCEv2). Each variant has its advantages and disadvantages, but NVMe/TCP offers the lowest admission fee to NVMe-oF, particularly if you’re replacing iSCSI:

* Note: Synchronous and asynchronous replication is already supported, but Active-Active replication will be available for volumes served by the NVMe/TCP protocol in a future InfiniBox release.

Looking back at the inception of NVMe and the NVMe-oF family of protocols, performance was a major driver in their design, and we’re happy to announce we delivered on that front as well. When compared to iSCSI with the same equipment, we’ve seen workloads with IOPS results 30% higher, while delivering 35% lower latency.

NVMe/TCP overall has very clear advantages in terms of simplicity, cost, and performance, and it is not surprising to see VMware enhancing their support for it. VMware with an InfiniBox enterprise storage platform leverages all the existing advantages of using InfiniBox today, and provides protocol modernization as well as what should be a nice (and free!) performance bump.

For more information, go to the accompanying blog posts at the links listed below:

In addition, the following are blog posts by two of Infinidat’s Tech Alliance partners:

Tsiyon Sadiky is a product manager at Infinidat. Prior to joining Infinidat, Tsiyon filled various positions in storage companies in the last two decades.