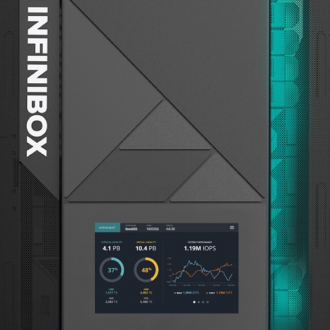 The vMSC solution, combining storage array-based synchronous replication with VMware vSphere capabilities, enables vSphere clusters to spread across geographical locations (aka "Stretched Clusters"). Deploying vMSC together with InfiniBox Active-Active replication provides the most resilient solution for protecting applications data, availability and enables an extremely fast recovery during a failure scenario, even in the event of a full site failure. 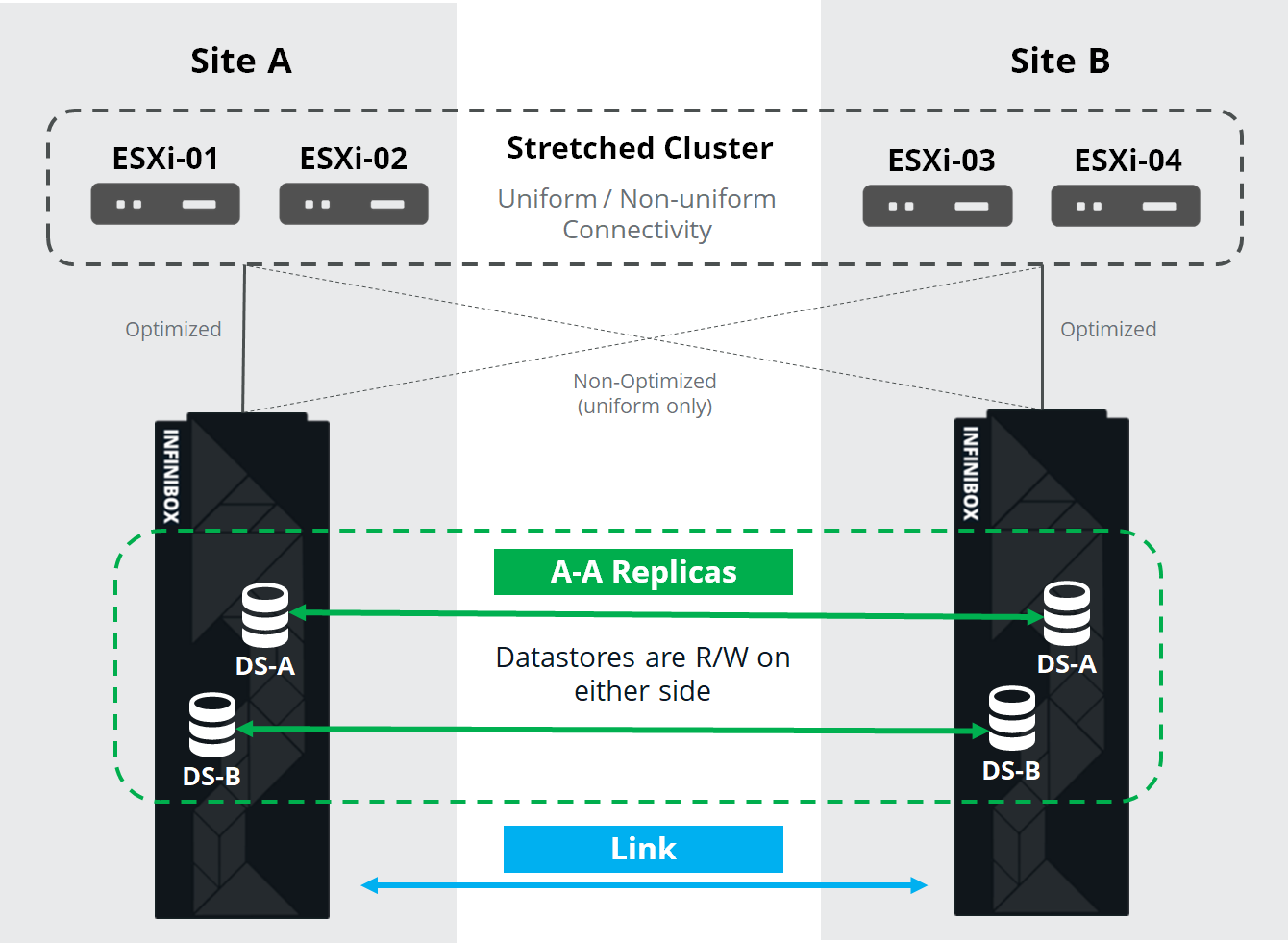 vMSC solutions are classified into two distinct types based on the fundamental difference in the way the vSphere hosts access the storage array, which influences design considerations.

InfiniBox supports both uniform and non-uniform host access types (host typology), allowing customers to deploy vMSC with the design that fits best to their environment and needs.

InfiniBox Active-Active replication, providing zero-RPO and zero-RTO, was introduced in R5 to maximize mission-critical business-services availability and to enable applications to keep operating even through a complete site failure:

As vMSC leverages InfiniBox innovative and high-performance replication mechanisms, the replication RTT-added latency is minimized, allowing achievement of a high level of resiliency and availability, with a minimal performance impact.

InfiniBox can also intelligently hint to the vSphere hosts about which are the optimal paths to serve I/O. This is crucial when configuring vMSC with a Uniform storage access, as the hosts are presented with typically less-optimal paths to the datastore from the remote InfiniBox system.

Using InfiniBox and vMSC, customers gain a transparent and automatic failover between data centers in case of failures. Deploying vMSC using the uniform storage access provides the most resilient solution, allowing all vSphere hosts to continue to access the storage (datastores) even in the case of an entire InfiniBox system failure.

In cases where vSphere hosts in a site encounter a storage failure, they will automatically shift I/O to the non-optimized paths to the remote InfiniBox system in the other site, resulting in a completely transparent and uninterrupted fail-over. 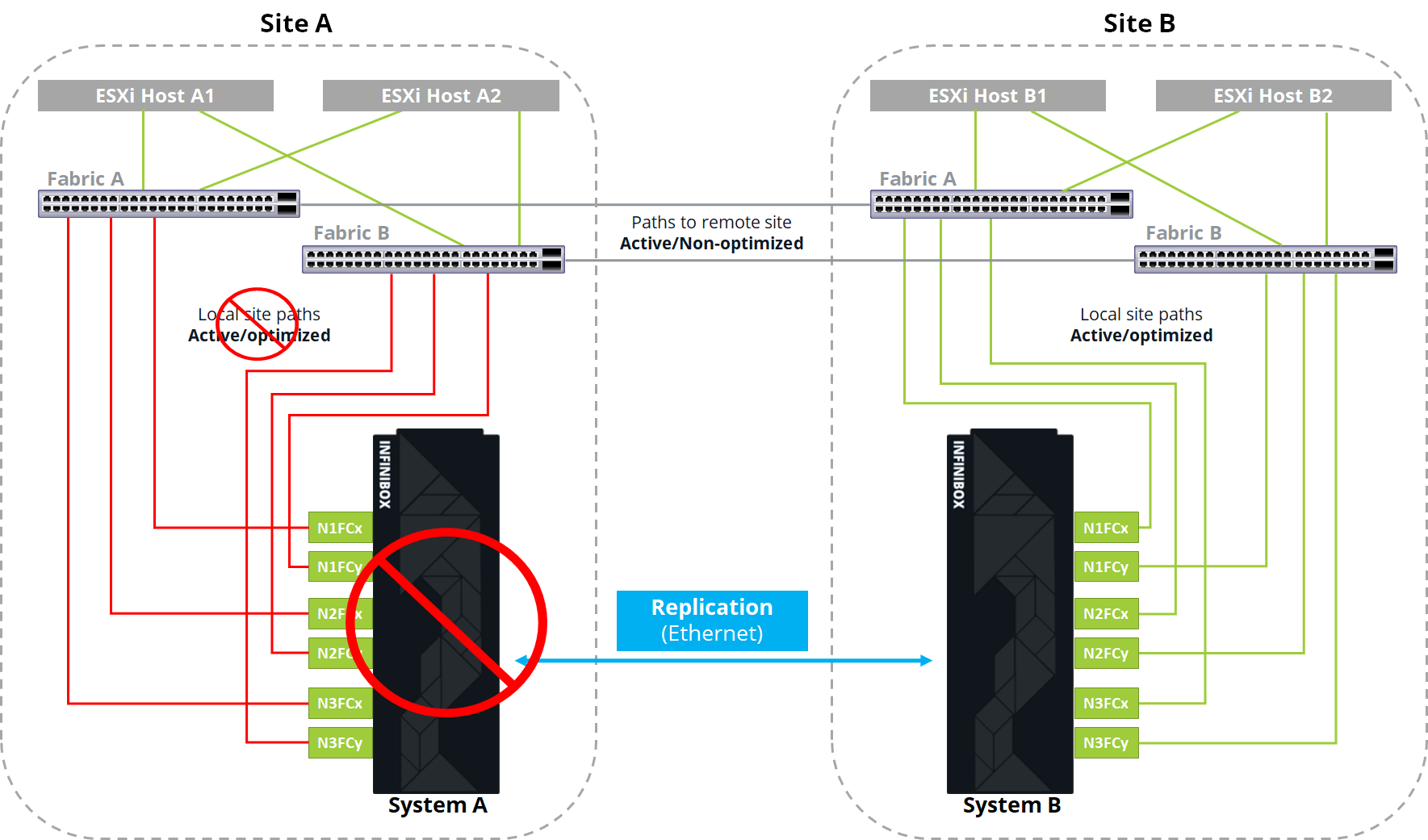 InfiniBox Active-Active replication failover and recovery is completely automatic - no intervention is necessary to trigger a re-sync to recover replication. If an InfiniBox system was disconnected, the replication will internally fallback to async mode. Once the connectivity between the systems is restored, synchronization jobs will start replicating the missing data to the lagging system.

As the volumes are nearly in sync, they will smoothly transition to Sync replication mode, with no I/O disruption. The host paths to the lagging side will be automatically restored, allowing the hosts to perform I/O operations through both systems again.

The following image illustrates the presentation of a datastore residing on an InfiniBox volume undergoing Active-Active replication. 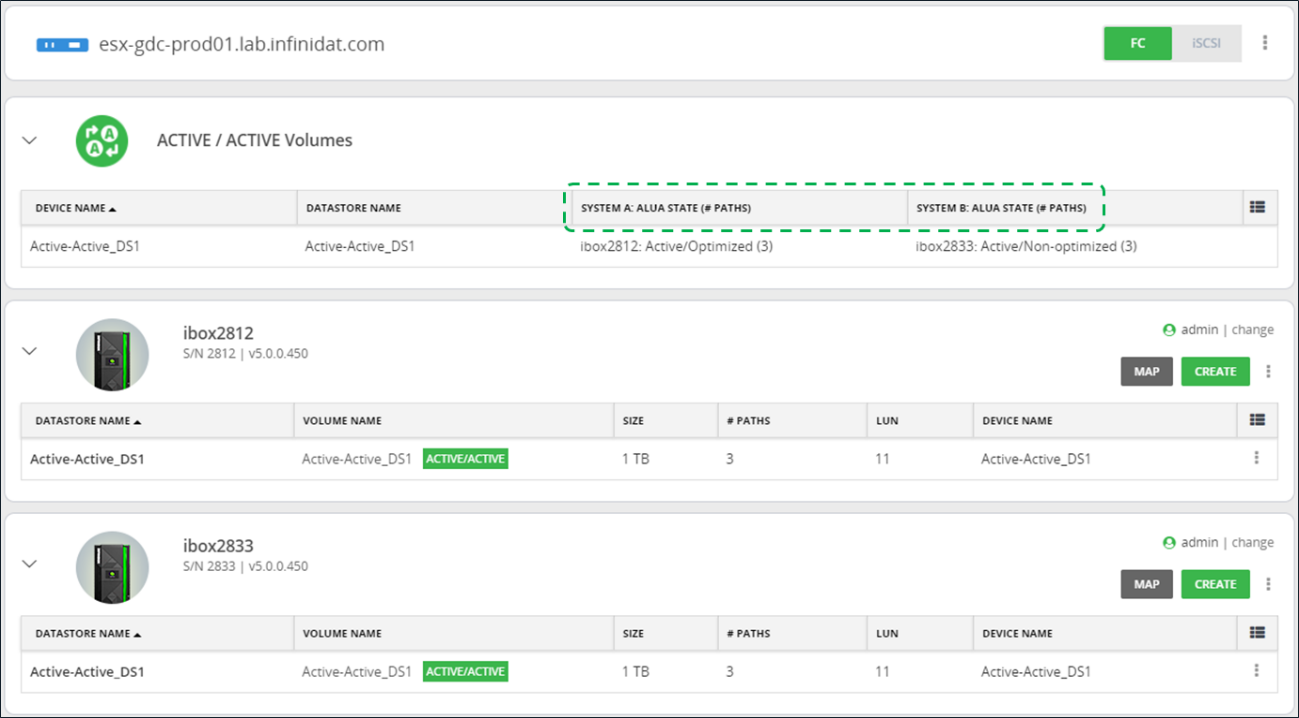 Ido Dubovi is the Director of Product Manager and VMware expert responsible for driving Infinidat’s partner ecosystem integration. His work covers proprietary and open source platforms. An observant market watcher and analyst, he is a key influencer of INFINIDAT’s solutions roadmap. His prior roles include consultant for numerous IT verticals and storage architect for datacenter and cloud deployments.