Does IT Infrastructure really matter? YES!

In May 2003 Nicholas Carr published a piece titled “IT Doesn’t Matter”. It immediately stirred up controversy in business, education, and information systems circles, and ruffled more than a few feathers with some IT vendors. When reading that article almost 20 years later, I find myself challenged to disagree, even now, with many of the examples and evidence points that Carr presented. But I find myself disagreeing with his interpretations of his own credible evidence, and more importantly his conclusions, just as strongly now as I did then when I first read his piece in 2003, if not more so.

“What makes a resource truly strategic—what gives it the capacity to be the basis for a sustained competitive advantage—is not ubiquity but scarcity. You only gain an edge over rivals by having or doing something that they can’t have or do.”

I agree! But Carr continues:

“By now, the core functions of IT—data storage, data processing, and data transport—have become available and affordable to all. Their very power and presence have begun to transform them from potentially strategic resources into commodity factors of production. They are becoming costs of doing business that must be paid by all but provide distinction to none.”

I strongly disagree! And over the last 20 years there have consistently continued to be a myriad of real-world public examples of IT success stories that completely contradict Carr’s conclusion, possibly even within your own organization. For example, the success of digital commerce - B-to-C or B-to-B - as well as the increasing sophistication of the Global Fortune 1000, regardless of industry, has been heavily predicated on the power to harness their IT to drive customer business value.

So what changed, and what did Carr miss that has enabled IT to still provide ongoing sustained competitive advantage for organizations, and competitive differentiation between IT infrastructure vendors, even when they use similar commodity hardware components? SOFTWARE!

And not just merely software, but the fully-expected and predicted rise of software known as Artificial Intelligence in particular.

If there were an automobile race between myself and Formula One multi-year champion Lewis Hamilton, I’m pretty sure that he would win every time, not just if we raced in the same “commodity” vehicles, but even if I had his F1 car and he had my sedan. It’s all about the intelligence of knowing how to optimize commodity hardware, and not the hardware itself.

Yet despite what we’ve learned over the last 20 years, the cries that “IT is all commodity!” have arisen anew from a source that Carr didn’t predict in 2003, as well as from an unlikely second source: 1) The Mega Public Cloud providers, and 2) The Big legacy IT vendors. And from those sources, this opinion has begun to take hold with some people.

This became obvious to me during the Chief Data Officer Summit in Ohio in September. I had the pleasure to not just attend this excellent conference, but the privilege to serve as the moderator for an expert panel on “Achieving Success with Data Analytics”.

After attending several sessions at the conference, and from multiple individual 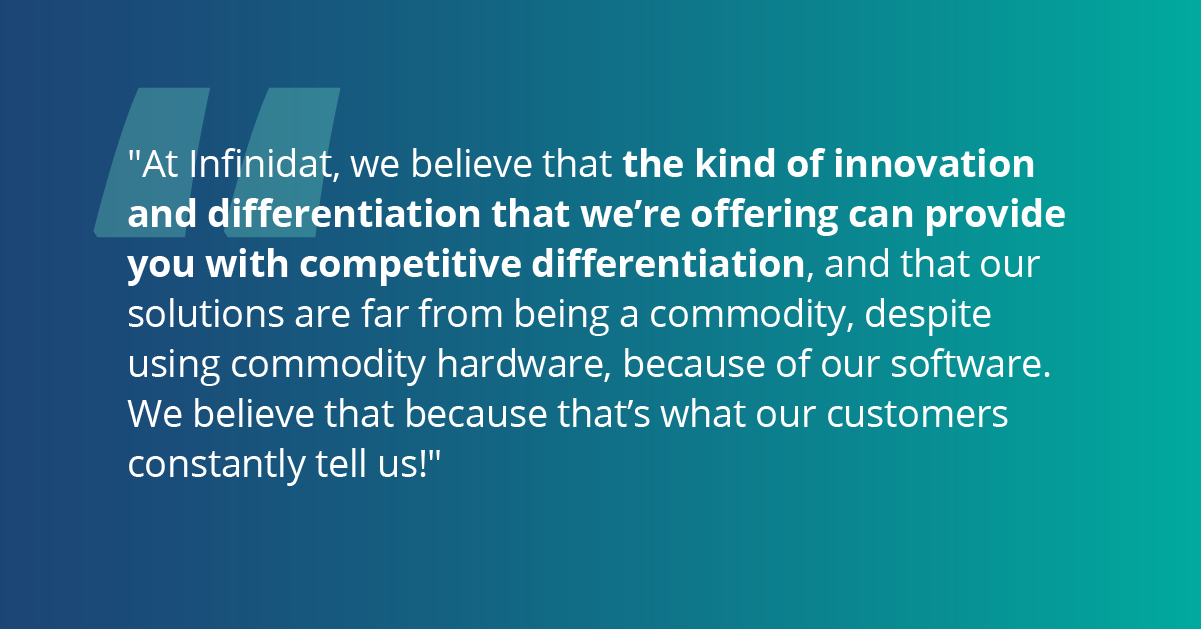 conversations with other executives that were attending, I came to a surprising conclusion. Many people in this critically-important audience - the people that own, manage, and deliver organizational data - in general did not perceive differentiated value from IT infrastructure. They all recognized that there are three primary camps that must all come together in their organizations for good IT solutions:

The attitude that I heard from many of the Data People was that they see the critical need to work closely with the Business Owners, but NOT with their IT Infrastructure teams, despite the fact the dramatic growth of many companies, such as Apple and Amazon, has been drive by superior ability to leverage and direct IT for significant business value and differentiation. They all saw value in what THEY themselves were doing in their part of the organization, but not so much consistently with their IT Infrastructure counterparts.

They have been methodically inundated with messaging from the mega public cloud providers, certain large legacy IT vendors, and sadly even a small handful of industry analysts that have told them that they shouldn’t care or focus any attention on infrastructure, and that it can just be taken for granted, as a commodity, in exchange for a defined service level.

Some actual quotes that I heard:

So a bit shocked, I probed further, and got some very interesting responses.

Q: Does availability matter to you?

A: “YES!!!!!, we’re in big trouble if our users don’t have continuous data availability!!!”

Q: Does performance matter to you?

A: “YES!!!!!, we’re in big trouble if our users can’t get near-instantaneous (or better) response times all the time!!!”

Q: Does cyber-resilience and protection against ransomware matter to you?

Q: So, has your current infrastructure met those kinds of service-level objectives (SLOs) for your team 100% of the time, all the time, to enable your success? “

These questions tended to lead to a discussion (surprise!) about how highly-differentiated IT Infrastructure, like storage from Infinidat (!) could not only help them to achieve their objectives more effectively, but do it at a substantial cost saving when compared to the “commodity” alternatives that they had been using or considering. And that it was primarily SOFTWARE, and a bit of architecture too, that made the difference.

One person at the conference that I spoke with that “got it” was the CIO of a major financial organization, as all three of the previously mentioned constituencies report up to that person, and they fully recognize the value and importance of all three pieces working together in consort, and specifically the unique value that good IT Infrastructure brings to a solution. That organization has also been able to tangibly articulate the value that IT provides to give them ongoing competitive advantage.

So why are the mega public cloud vendors saying “you don’t need to know or care what’s inside our cloud”? And why are large legacy IT vendors pushing new tools to force you to buy their products without you actually knowing what specific products or configurations you’ll be getting under the covers? It’s pretty obvious. It’s because their offerings actually are closer to being commodity, and they have effectively “thrown in the towel” on investing in differentiated innovation through software, particularly when it comes to storage.

At Infinidat, we believe that the kind of innovation and differentiation that we’re offering can provide you with competitive differentiation, and that our solutions are far from being a commodity, despite using commodity hardware, because of our software. We believe that because that’s what our customers constantly tell us! A VP of Technology in the Finance industry recently said this publicly in Gartner Peer Insights: "If You Aren't Running Infinidat In Your Data Center, You Are Wasting Money On Storage!"

How can Infinidat help you to set yourself apart from the “commodity” trap?

Infinidat’s triple-redundant, Active-Active-Active architecture, in conjunction with our Infiniverse AIOps software and “minimal touch” service capability allows Infinidat to offer a 100% availability guarantee, with real teeth in it. In these modern times systems often must stay continuously operational all the time, forever! Infinidat’s unique architecture, software, and serviceability approach enable this. Not a commodity!

All the way back in 2012 “The Google Gospel of Speed” said this: “Our research shows that if search results are slowed by even a fraction of a second, people search less (seriously: A 400ms delay leads to a 0.44 percent drop in search volume, data fans). And this impatience isn’t just limited to search: Four out of five internet users will click away if a video stalls while loading.”

Performance these days is almost always all about latency. Infinidat’s InfiniBox SSA has the fastest real-world latency of any enterprise storage system in the industry, with customers hitting consistent floors of 30 microseconds (30us) according to ESG’s analysis. We’ve officially claimed as fast as 35 microseconds, so we’re maybe being even a little bit conservative. If responding to your users, clients, and customers faster than your competitors matters to you, we can help. To put this into perspective, 30us (microseconds) storage performance latency is more than 10,000X faster than the “400ms” (milliseconds) that is referenced above. This isn’t “commodity” performance. For instance, one of our Fortune 500 Telco customers told us after they switched to Infinidat their real world application performance increased by an average of 10X - yes, not 10% but 10X for most of their applications. Another Fortune 500 Healthcare customer said their real world application performance, once they moved to Infinidat, increased an average of 6X, with several applications hitting 10X better performance. We’ll even examine your real applications and give you a performance guarantee, where we usually can provide (and guarantee) significant improvement over whatever “commodity” storage you’re currently using.

How do we do it? Our patented Neural Cache software caches data into ultra-fast DRAM more intelligently and effectively than all market alternatives. By a lot! Our “secret sauce” is about as far away from the concept of “commodity” as you can get, and it’s driven by SOFTWARE!

The Infinisafe reference architecture allows Infinidat to provide the industry’s ONLY (hard to call something unique a “commodity”) cyber storage resilience and recovery guaranteed SLAs for primary storage, allowing you to tell the bad actors to “take a hike!” if they have successfully compromised your production data. Data can be recovered from immutable snapshots guaranteed in less than one minute (typically much faster). A similar concept and cyber storage resilience guaranteed SLAs was recently extended to our InfiniGuard purpose-built modern data protection appliance, which can present any size data set from immutable snapshots in less than 20 minutes, even at double-digit Petabyte scale.

Infinidat’s patented and unique Neural Cache software is not only able to provide industry-leading performance, but because it is implemented as a caching architecture rather than a tiering architecture, this allows the back-end persistent storage of our standard InfiniBox to be implemented with ultra-high capacity, ultra-low cost conventional hard disks or all flash media. Thus, the total package doesn’t look, or run, anything like a conventional “commodity” storage system. In stark contrast, it can typically outperform conventional all-flash arrays, but do so at a fraction of the cost, with excellent “green” environmental characteristics and footprint, at multi-Petabyte scale, and still with that 100% availability guarantee. And if you need and value the ultimate in performance, our InfiniBox SSA system uses all solid-state technology to outperform all alternative enterprise storage systems. So what have Fortune 500 customers said this has resulted in? A Fortune 500 Healthcare enterprise told us an ROI of 9 months, while a Fortune 500 financial institution said they reduced their CAPEX and OPEX costs by 70+%.

A lot has changed since that article in 2003, but in hindsight I believe that time has not only proven the primary premise of the article to be wrong back then, but I’ll put my personal stake in the ground that it will still continue to be wrong, at least until quite a while after I’ve retired from this industry. Differences in IT Infrastructure, especially in something as basic as enterprise storage, continue to provide clear definable differences that can be exploited for your competitive advantage.